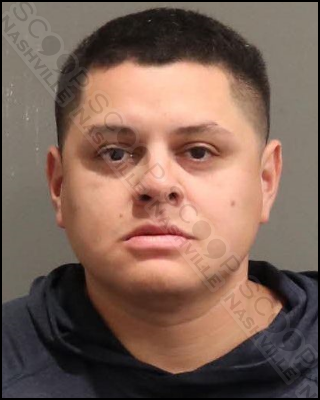 Metro Nashville Police responded to an intoxicated trespasser at the JW Marriott Hotel Friday in downtown Nashville. Hotel staff identified a person in the valley lane, 33-year-old Marcel Gonzalez, as the man who refused to leave and was “frothing at the mouth.” Officers attempted to locate a friend or relative to help him get to his destination or to retrieve him but were unable to contact anyone despite multiple attempts. He was then deemed to be a danger to himself and taken into custody. He refused to be cuffed and actively resisted when officers were cuffing him. Once at the downtown detention center inside the Sally port, Gonzalez complained his cuffs were hurting him due to the tightness. Officers approached him and attempted to loosen his cuffs for his satisfaction, at which point he kneed Officer James Hill in the groin.

Marcel Julian Gonzalez of Victoria Road in Hartford, CT, was booked into the Metro Nashville Jail on August 5th, charged with public intoxication, assault of an officer, and resisting arrest. He is free on an $8,500 bond.