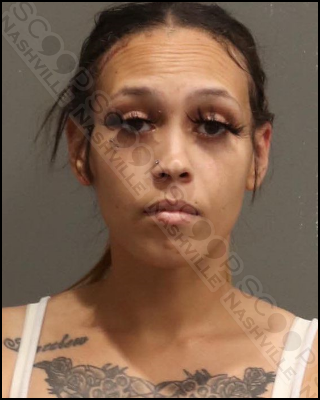 29-year-old Kira Mercedes McKenzie Joyner was booked this week on outstanding citations from 2020, which she never self-booked on. Police say on December 3rd, 2020, Kira McKenzie Joyner was inside the Hot Topic store at Opry Mills Mall when Mall Security Officer Bailey McCluskey made contact with her as she was reportedly caught shoplifting. As she was being detained and escorted to the mall’s security office, she kicked him on his left leg and began to yell and scream, causing a disturbance to other shoppers in the mall. She was issued state citations for disorderly conduct and assault and never appeared for them.

Kira McKenzie of Murfreesboro Pike in Nashville, TN, was booked into the Metro Nashville Jail on August 21, charged with disorderly conduct and assault. A judicial commissioner set her bond at $200, and the Davidson County Sheriff’s Office gave her pre-trial release from their facility.