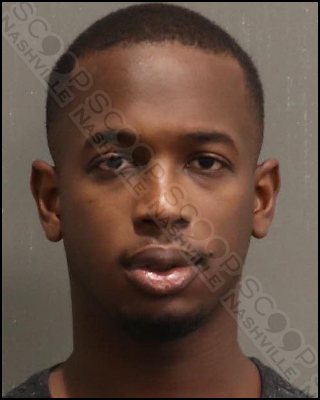 27-year-old Jaleel Love Boyce showed up on the front porch of the mother of his child, Emilia Baird. He was pacing back and forth, demanding to be let inside. Prior to his arrival, he texted her that he was coming over, and she replied ‘no’ multiple times. Despite the denial, he arrived, paced, and banged on the door while demanding to be let inside. Video footage of the incident shows him shoulder-checking the door, stating, “I will break the door down, I will get in at all costs, I will go to jail over this!” Baird states she was in fear for her safety and the safety of her child. Officers arrived and took him into custody, charging him with domestic assault/fear of bodily injury.

Jaleel Love Boyce of Emely Ct in Antioch, TN, was booked into the Metro Nashville Jail on August 31st, charged with domestic assault with bodily injury. A judicial commissioner set his bond at $2,000.