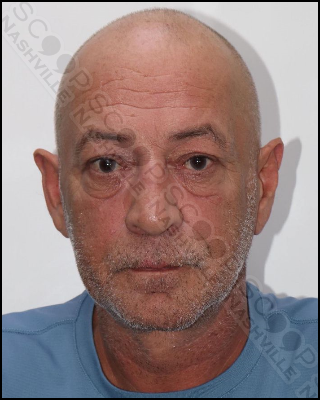 Metro Nashville Police responded to the Hampton Inn at Opryland on August 27th after someone called to report a man actively assaulting who was believed to be his wife and strangling her. When officers arrived, 56-year-old Bradley Keith Olsen had already fled the scene. The victim, Sacha Ross, stated she was in town looking at houses in order to move from Florida to Tennessee and had invited her ex-husband, Olsen, over for the weekend to see if things could be rekindled between them. It wasn’t long before that question was answered as an argument started in the bathroom over who would take her dog out. She says he assaulted her multiple time and then beat her with an iPad as she moved to the bed. Eventually, she says he pushed her against a wall and lifted her up by her neck, causing her problems breathing. Officers spoke with Olson via the phone, and he refused to return to the hotel and stated he might just keep her dog. He was eventually booked into custody on September 3rd.

Bradley Keith Olsen of Bimini Drive in Bradenton, FL, was booked into the Metro Nashville Jail on September 3rd, charged with domestic assault with bodily injury and aggravated assault with strangulation. A judicial commissioner set his bond $26,000.