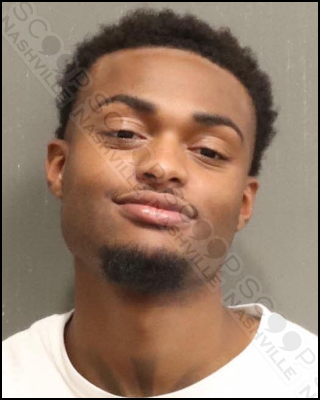 24-year-old Isaiah ‘Zay’ Kahlil Yancey was booked on a citation this week after Metro Nashville Police found 0.5 grams of marijuana inside his gym bag during a traffic stop outside the Mercy Lounge on July 22nd for alleged expired tags. Officers say there was a “strong smell” of marijuana coming from the vehicle, and when asked, Yancy volunteered that there was a small amount of marijuana in the Altima.

Isaiah Kahlil Yancey of Hicks Rd in Nashville, TN, was booked into the Metro Nashville Jail on the outstanding citation on September 8th, charged with simple drug possession of marijuana. A judicial commissioner set his bond at $100, and the Davidson County Sheriff’s Office gave him pre-trial release from their facility.