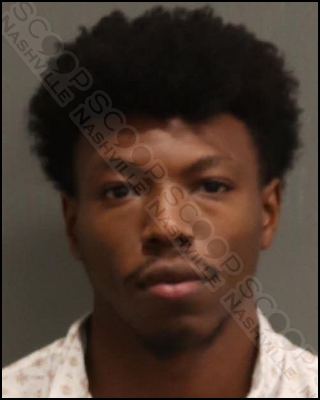 Metro Nashville Police Sergeant Jason Sweeney was traveling on Briley Parkway Tuesday when 25-year-old Charles Williams sped past him. Sweeney sped up beside the vehicle and hit the siren to get the driver’s attention, and flashed his hand with all five fingers up twice to signal “fifty-five,” attempting to indicate the speed limit. Williams waived back at the officer and continued to travel at 70 mph in the 55 mph zone. The officer then conducted a traffic stop and immediately smelled marijuana. He asked Williams if he had any marijuana in the car, to which he replied “no.” He then admitted he had “a blunt” in the vehicle, causing the officer to initiate a search. Upon being told his car was being searched, Williams further disclosed there was actually a half-pound of marijuana in his backpack. A search revealed 238.7 grams of marijuana, digital scales, plastic baggies, and cigarillos. Williams continued to speak to the Sergeant and admitted he had sold marijuana to “two people” in the last month.

Charles E Williams of Becklea Dr in Madison, TN, was booked into the Metro Nashville Jail on September 13th, charged with possession with intent to sell a schedule VI drug and unlawful use of drug paraphernalia. A judicial commissioner set his bond at $4,000, and the Davidson County Sheriff’s Office gave him pre-trial release from their facility.