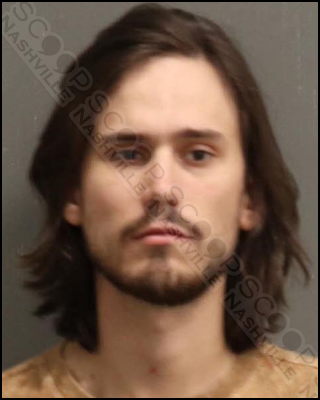 Kansas McCall Redmon says her 25-year-old boyfriend, Turner Binkley III (Trey Binkley), purchased a brownie containing Delta-8 at a store inside the Opry Mills Mall on Sunday. After he consumed the brownie, the couple went to bed at 10 p.m., and everything went well until 1 a.m. — when Binkly woke up “in a state of panic” and became violent” Binkly says he has no memory of Sunday or Monday, but his girlfriend recalls all the vivid details…

Metro Nashville Police met with Kansa Redmon, who explained when Binkley woke up at 1 a.m., she attempted to calm him down, but he remained in a state of panic and climbed on top of her on the bed and held her arms against her chest. She was then thrown off the bed and onto the floor, where Binkley got behind her and used his right forearm to strangle her, and she was in fear for her life and unable to breathe. Binkly then shove his hands inside her mouth and pulled “extremely hard” away from her body, Redmon eventually bit his fingers to release her mouth from his grip. She says he then continued to strangle her and punch her in the back. She eventually used the ruse of taking him to the hospital in order to escape. He chased after her vehicle as she escaped to a friend’s house to call 911.

Binkley declined to answer any questions without a lawyer present.

Turner G. “Trey” Binkley III of Bell Rd in Hermitage, TN, was booked into the Metro Nashville Jail on October 17th, charged with aggravated assault with strangulation. A judicial commissioner set his bond at $1,000, which he posted in cash.