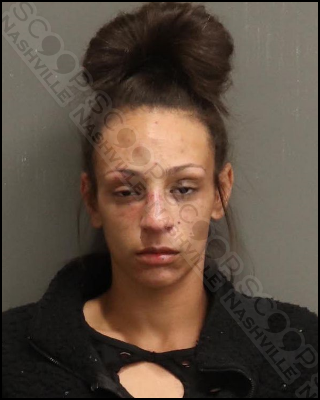 21-year-old Adrianna Reshay Scivally and Joshiana Moore have been lovers for the past six years but are currently broken up, though they still live together. Early Saturday morning, the two were at Deja Vu on Church Street in Nashville, where they decided to spend their money on a specific dancer that they both had an interest in. However, when they couldn’t find that specific stripper, Scivally became irate and began to push and hit her on-again/off-again lover. She retrieved an iPad from the vehicle and hit the victim in the head with it, leaving a significant bruise on the victim. The two then had a fistfight in the parking lot until police arrived.

Adrianna Reshay Scivally of Terry Ln in Hermitage, TN, was booked into the Metro Nashville Jail on November 5th, charged with domestic assault with bodily injury. A judicial commissioner set he bond at $1,500.