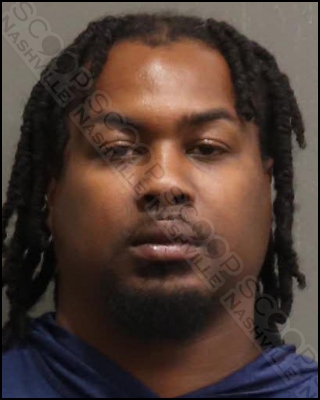 30-year-old Terrance Hudson is charged with the aggravated domestic assault/strangulation of his current girlfriend, Antwyneque Golliday. Police responded to their shared apartment on November 12th after the victim reported she was in the shower as Mr. Hudson repeatedly turned the water off in an attempt “to talk.” The victim exited the shower and attempted to get dressed when she says he shoved her and pushed her against the bathroom wall, and continued to argue. She says she broke free of his grip and attempted to get dressed in her bedroom when he followed her into the closet and strangled her with both hands.

She escaped that assault and later laid down on the bed to rest when she says Hudson again got on top of her and strangled her. She then fled the apartment with him giving chase to her, and when he caught up with her, she says he punched her in the face and the back of her head. As she was able to call 911, Hudson returned to the apartment. At the time of his arrest, Hudson had an outstanding warrant from March, which alleges he “destroyed a phone with his fist” while violating an order of protection at the home of the mother of his child.

Terrance Hudson was booked into the Metro Nashville Jail on November 12th, charged with an order of protection violation, vandalism, and aggravated assault with strangulation. A judicial commissioner set his bond at $15,000.