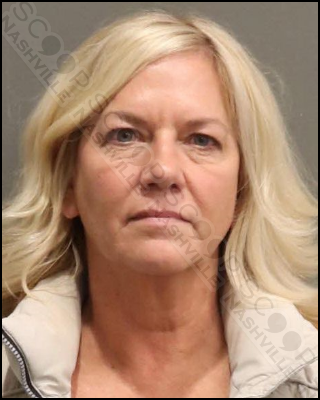 Melanie Wheeler says her 53-year-old wife, Jayne Adamson, splashed her with a cup of water as she slept on the couch, and after she stood up, proceeded to push her against a wall, then pushed her to the side, causing her to hit her head. The argument was reportedly over their pet dog. Officers documented injuries that were reportedly from the assault.

Jayne C. Adamson of Brandywine Cir in Old Hickory, TN, was booked into the Metro Nashville Jail on November 17th, charged with domestic assault with bodily injury. A judicial commissioner set her bond at $2,000.