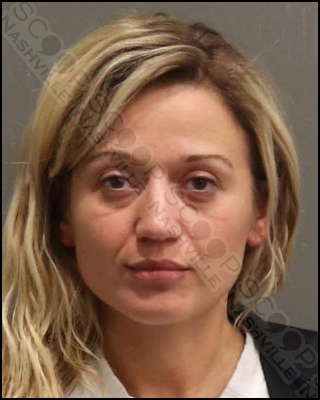 Officers were on Percy Drive on another unrelated call when they came in contact with 36-year-old Vitalina Yegorov Holder, who was standing beside her Silver Mercedes, which was parked with the engine running. Officers immediately noticed her slurred speech and the smell of alcohol. She admitted to drinking “two White Claws” prior to driving. She was reportedly so intoxicated that field sobriety tests had to be stopped for her own safety. Inside her car was an opened case of White Claw seltzer drinks with two open cans nearby. She would later blow a 0.147% BAC on a breathalyzer, as she found out there are, in fact, still laws when drinking Claws — something she should have known, as she’s married to local attorney Chris Holder.

Vitalina Yegorov Holder of Council Bluff Parkway in Murfreesboro, TN, was booked into the Metro Nashville Jail on December 1st, charged with driving under the influence (DUI). A judicial commissioner set her bond at $1,500, and the Davidson County Sheriff’s Office gave her pre-trial release from their facility.