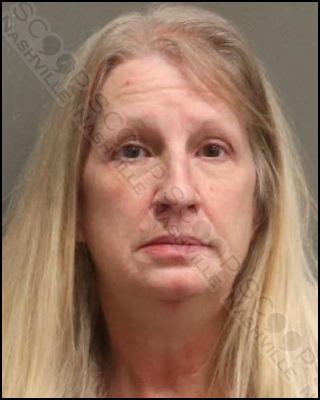 Police say 60-year-old Lisa Choate crashed her Hyundai Elentra into two parked vehicles before flipping it entirely upside down in the middle of Morrow Road on December 4th. She was unable to explain how the crash occurred but did admit to drinking two 100 ml 99-proof Long Island Tea bottles and smoking marijuana prior to driving. Officer located multiple empty bottles inside her purse and outside the car. During a search, officers also located marijuana inside three plastic bags, a plastic container, and in a metal pipe. Choate would later blow a 0.159% BAC on a breathalyzer.

Lisa A. Choate of Hite St in Nashville, TN, was booked into the Metro Nashville Jail on December 4th, charged with unlawful use of drug paraphernalia, possession or casual exchange, and driving under the influence. A judicial commissioner set her bond at $2,000.