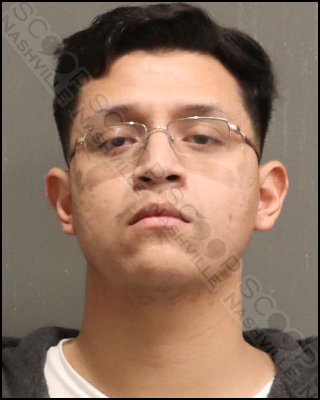 23-year-old Ulises Arzate is free on pre-trial release after police first received a call of a person who was flashing a gun in the parking lot of a Hooters restaurant in South Nashville after drinking inside. While officers were en route to the incident, Arzate walked to the San Jose Fiesta restaurant, where they located the man wearing a grey zippered hoodie. He had a bucket of Modelos on ice in the center of the table and one open one in front of him. When asked about a handgun, he raised his shirt and presented a tan Glock 43X MOS in his waistband. He admitted to having three beers while at Hooters and was charged with possession of a handgun while under the influence.

Ulises A. Arzate was booked into the Metro Nashville Jail on February 16th, charged with possession of a firearm in a bar. He is free on pre-trial release to his 420 Karstridge Rd address in Smyrna, TN