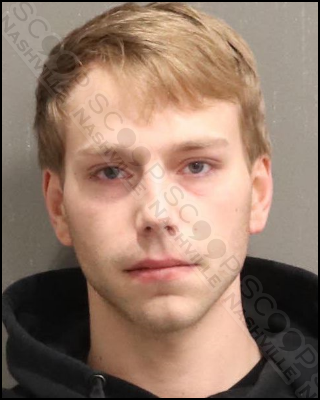 Michael Mills says he came home to find his 27-year-old boyfriend, Jacob Riley, heavily intoxicated and the home in disarray. The dining room table had been flipped over, and the living room furniture had been thrown around the room. Riley reportedly then spit in his lover’s face and attempted to attack him with a dining room chair. Officers arrived to find the above, plus dining room chairs thrown about, and Riley among the furniture in the living room.

Jacob Riley was booked into the Metro Nashville Jail on March 14th, charged with domestic assault/fear of bodily injury. He is free on a $1,000 bond, released to his 679 Candlestick Drive address in Nashville.