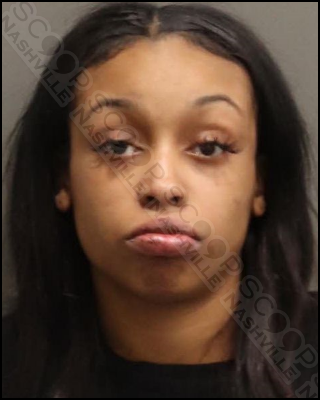 Police say 26-year-old Ramona Lavender and her sister were coming home from a bar when they were involved in a crash in Antioch Friday night. She was yelling and screaming at her sibling when police arrived and then turned her outrage toward officers as they asked questions related to the investigation. She then threatened to shoot the other involved driver, Justin Mathias, and shoot up his house. Once in the rear of a patrol car, she screamed racial slurs at officers, covered the car in her spit, and tried to kick out the windows. Once at booking, she spits on several officers, one of them directly in the face, then stated she had to use the restroom, at which point she pulled her pants down and urinated across the seats in the booking area.

Ramona Michelle Lavender was booked into the Metro Nashville Jail on March 19th, charged with disorderly conduct, vandalism of government property, assault, public intoxication, and assault of an officer. She is free on a $27,000 bond to her 1500 Porter Road address in Nashville.