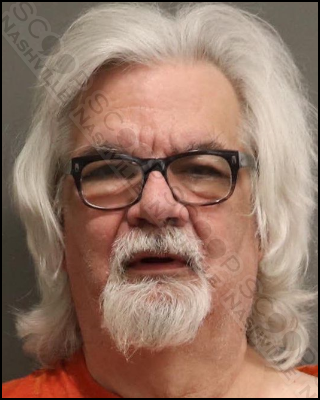 Police responded to a residence on Lake Chateau Drive late Sunday night, where they found “broken glass everywhere” and 68-year-old William ‘Billy’ Prine, the bother of the late John Prine, sitting on the kitchen floor “extremely intoxicated”. He told officers he was just throwing glass plates and fell down. A woman at the residence, Lisa Finkel, said he was throwing the plates in her direction, and she was in fear of being struck with the glass plates. Billy Prine was charged with assault, and transported to booking.

William J. Prine was booked into the Metro Nashville Jail on April 4th, charged with assault. He is free on a $2,500 bond to his 240 Lake Chateau Drive address in Hermitage.