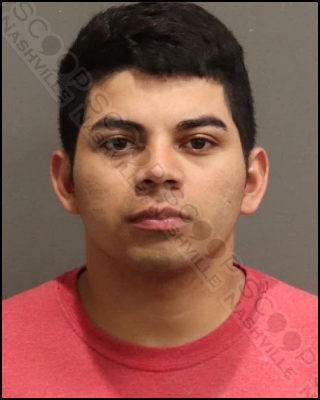 18-year-old Jason Yerel is charged with the domestic assault of his boyfriend, Faren Yovany Garcia, on Wednesday morning. Police responded to their apartment, where Faren stated the couple had a verbal argument when Faren attempted to leave and Jason grabbed him to try to stop him from leaving the home, ripping his shirt in the process. Faren states he was in fear of bodily injury at that time. Jason admitted he tore the shirt off Faren, and was taken into custody.

Jason Yeral was booked into the Metro Nashville Jail on April 13th, charged with domestic assault/fear of bodily injury. He is free on a $1,000 bond to his 307 Glengarry Drive address in Nashville.