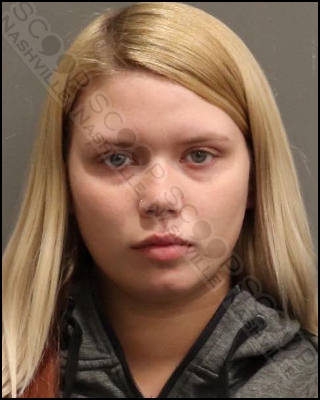 20-year-old Audria Marie Denning was jailed this week after she, accompanied by her two juvenile sisters, appeared at the home of her ex-boyfriend, Nesseam Alidani, six weeks after the breakup. She reportedly learned he had a new girlfriend and brought her girl squad to damage and dent his car. She then called and told him to come outside and look at his car, at which time all three girls attacked him. The victim states he was able to avoid being injured by deflecting the multiple and repeated hits with his arms.

Audria Marie Denning was booked into the Metro Nashville Jail on April 15th, charged with domestic assault. She is free on a $1,500 bond to her 110 Harris Street address in Goodlettsville.