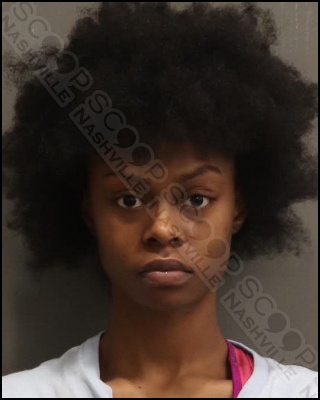 20-year-old Brooklyn Campbell was amid a breakup with her boyfriend, Carl (CJ) Hollingsworth, in May when they began to fight over a cell phone. Police say Brooklyn attempted to run over her ex-lover with her 2020 Altima while threatening to shoot up the area, however, he escaped by running in between two parked vehicles. She continued to plow into one of the parked vehicles, undeterred by his attempt to run away. She then pulled a handgun and fired it out the driver’s side window with several people in the immediate vicinity as she fled the area. Warrants were issued for her arrest, and she was jailed on them this week.

Brooklyn N. Campbell, of Bonneville Lane in Smyrna, was booked into the Metro Nashville Jail on June 23rd, charged with aggravated assault with a deadly weapon, leaving the scene of an accident, vandalism, reckless endangerment, and failure to file a report. She is free on a $19,500 bond.