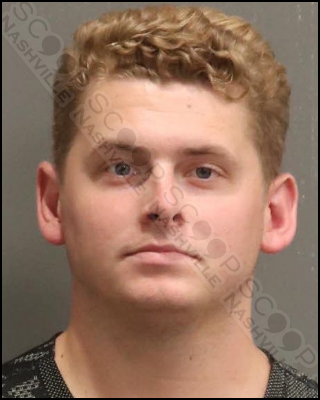 22-year-old Brendan Whalen and his brother, Ryan Whalen, were both jailed on criminal trespass charges this weekend at Jason Aldean’s Bar on Broadway in downtown Nashville after they were involved in a fight that left a man with a broken ankle and were kicked out of the bar. Despite warning to not return to the venue, just hours later they were back inside and quickly noticed by security manager Joshua Lynch as they caused yet another disturbance. The two New Yorkers were detained until police arrived, and charged with criminal trespass.

Brendan Whalen, of Jennifer Drive in Plattsburgh, NY, was booked into the Metro Nashville Jail on June 10th, charged with criminal trespass. A judicial commissioner set his bond at $1,000, and the Davidson County Sheriff’s Office gave him pre-trial release from their facility.