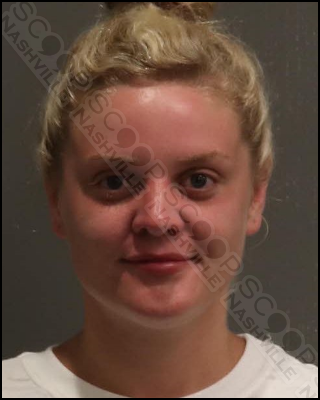 25-year-old Madeline Beck now makes her third appearance on Scoop: Nashville, after a video appears to show her under the influence of a mind-altering substance Saturday at a location she wasn’t allowed to be at, and after someone had to come and pick up her child as she was unable to provide appropriate care, according to court documents.

Video shows her at the home of her boyfriend, Keith Connors, where bond conditions from a prior domestic assault arrest specifically prohibit her from being, even if the other party allows for it. Police say Maddie Beck reportedly began drinking early Saturday morning after other people in the house say she was upset over losing her phone. She became so intoxicated on substances that other people at the home had to contact the child’s father to come to pick him up as Beck was no longer able to look after him, as shown in the video.

She was unaware the child’s father had picked him up until some time after it occurred, and when she woke up and realized it, she was extremely upset and caused a scene at the home. Police arrived and verified the bond conditions prohibiting her from being at the location, and took Beck into custody. Beck was recently covered after she was charged with domestic assault on her boyfriend, and prior to that when she was drunk and pantless passed out behind the wheel of a car in Nashville

Madeline Beck, of Tulip Grove Road in Hermitage, was booked into the Metro Nashville Jail on July 9th, charged with violation of her bond conditions/conditions of release. She is free on a $1,000 bond.