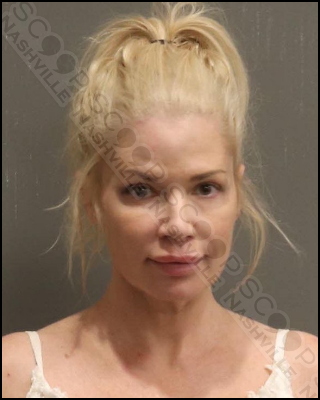 50-year-old Gwuenavere ‘Gwen’ Morgan was jailed just before daylight Tuesday after she drove into a brick wall at the intersection of Burton Hills Blvd & Cumberland Place. First responders found her unresponsive behind the wheel with the car still running. Gwen Morgan told officers she fell asleep and drove into the brick wall. As she was speaking, it was obvious she had been drinking from the smell of alcohol coming from her person. She admitted to having two glasses of wine. Before field sobriety tests could even be started she fell down and had great difficulty standing on her own. She performed poorly on the tests she was able to take and refused a breathalyzer or any further testing. She was jailed and her car was towed to impound.

Gwuenavere Morgan, of Boxmere Place in Nashville, was booked into the Metro Nashville Jail in the early morning hours of July 12th, charged with driving under the influence (DUI) and violation of the implied consent law. A judicial commissioner set her bond at $2,000 and the Davidson County Sheriff’s Office gave her pre-trial release from their facility.