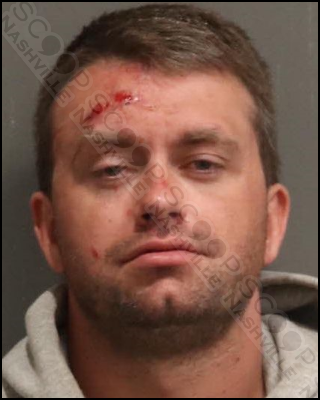 Amy Weiler says she was asleep when her husband, 34-year-old Joshua Weiler, came home extremely drunk and bragging about a bar fight he had been in. She asked him to be quiet, and he then reportedly began to berate her, call her names, and become increasingly aggressive, slapping her in the face. She says she spalled him back and then he began to strangle her neck, leaving clear finger marks on the side of her neck. She says he continued to slap and hit her in the face as she attempted to defend herself. She was transported to the hospital for a laceration and bump from being smashed into the headboard and to be monitored for the strangulation. Joshua was charged with felony aggravated assault/strangulation.

Joshua Matthew Weiler, of Bettie Drive in Old Hickory, was booked into the Metro Nashville Jail on Jul 10th, charged with aggravated assault/strangulation. He is free on a $25,000 bond.