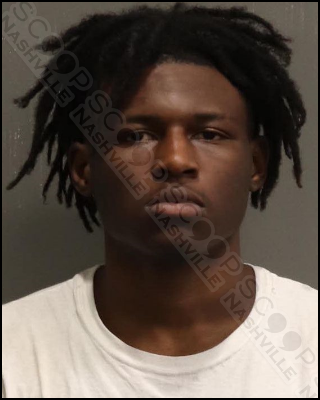 Officers working the Entertainment District Initiative in downtown Nashville Friday night observed 19-year-old Ja’Corious Hudson outside of Lucky Bastard Saloon yelling and pushing at another individual in an attempt to instigate a fight. As officers approached and advised him to move along, Hudson continued to push the other individual. He was taken into custody and pulled away from officers during the arrest, earning him a resisting charge in addition to disorderly conduct.

Ja’Corious Lil’Jaylen Hudson, of 42nd Ave North in Nashville, was booked into the Metro Nashville Jail on July 23rd, charged with disorderly conduct and resisting arrest. A judicial commissioner set his bond at $2,000, and the Davidson County Sheriff’s Office gave him pre-trial release from the facility.