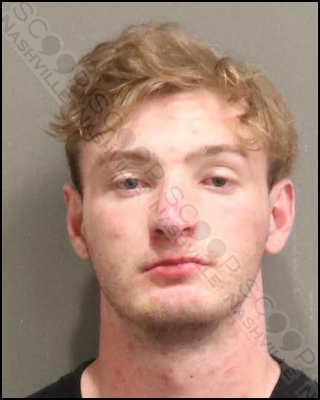 Just before 3 a.m. Saturday, Metro Nashville Police working the Entertainment District Initiative in downtown Nashville responded to Whiskey Row on Broadway to find 22-year-old Scott Valentine being disorderly. Management of the bar reported they had asked him to leave the business, and he refused, then security physically removed him after the began to fight with them, and he continued to attempt to re-enter the bar. Officer took him into custody and transported him to booking.

Scott Valentine of Blue Springs Lane in Oceanside, CA, was booked into the Metro Nashville Jail on August 6th, charged with disorderly conduct and criminal trespass. A judicial commissioner set his bond at $2,000, and the Davidson County Sheriff’s Office gave him pre-trial release from their facility.