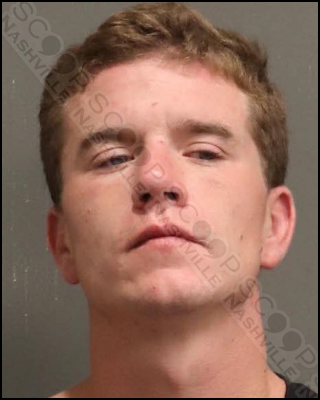 Jessica Reeves says she was at the WoodSpring Suites near Rivergate hotel with 31-year-old Michael L Hodges Wednesday morning when he used a dog leash to whip her several times on her left buttock and slapped her in the face during an argument. Throughout the day and evening, she states he had been drinking alcohol and became more aggressive with her, and eventually pushed her onto the bed and attempted to strangle her. She attempted to flee, and he pushed her as she made her way to the lobby. The hotel room was tossed with furniture flipped over.

Hodges then reportedly went to Hendersonville, where he made threats to shoot people, and then found his way back down Gallatin Pike to the Walmart parking lot in Madison where police found him wearing all black clothing in a black pickup truck. He admitted he was in an argument with his girlfriend, Jessica, and was taken into custody.

Michael L Hodges was booked into the Metro Nashville Jail on August 18th, charged with domestic assault with bodily injury. A judicial commissioner set his bond at $3,000.