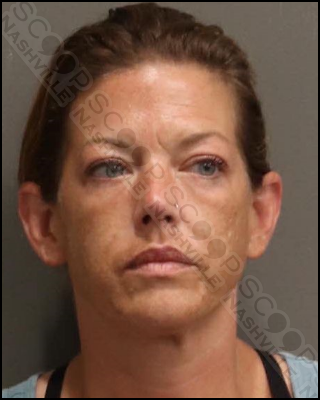 Metro Police say 41-year-old Tara Michelle Basham entered the Walmart on Hamilton Church Road and filled a cart with items on which she replaced the original barcode with printed 0.67 cent barcodes. She then used the self-checkout to scan and pay based on the much 0.67 cents per item. The retail cost of the items would have been $256.82, according to AmandaSims with Walmart loss prevention. Loss prevention initially detained Basham and notified the police, but since they did not respond in a timely manner (it was over 2 hours before officers arrived after the initial call for police assistance), they had already released her when officers arrived. It was discovered that Basham had been banned from Walmart for life in May of 2020 and again in December of 2020, so the officer obtained a warrant for felony burglary. She was booked on that warrant this week.

Tara Michelle Basham of George Buchanan Drive in La Vergne, TN, was booked into the Metro Nashville Jail on August 18, charged with felony burglary. A judicial commissioner set her bond at $1,000, and the Davidson County Sheriff’s Office gave her pre-trial release from their facility.