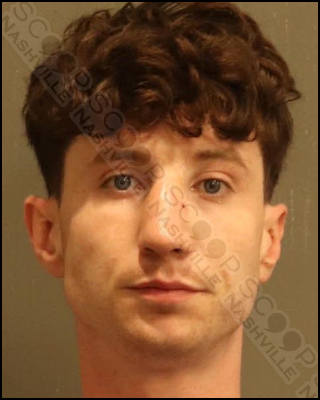 Metro Nashville Police say 22-year-old Patrick Thomas was on lower Broadway in downtown Nashville when he became injured in an unknown incident. Nashville Fire’s Medic 9 responded and began treating Thomas at the scene in the back of an ambulance, but he refused any additional transport to a hospital for further care. He was extremely intoxicated and unable to care for himself, and officers were unable to determine anyone he was with, where he was staying, or anyone to call to collect him. As it was determined he would be charged with public intoxication and transported to jail, Thomas was handcuffed while in the back of the ambulance. Now in cuffs, Thomas suddenly lunged forward past the MNPD officer and jumped out of the ambulance, and fled on foot for over two blocks before officers caught up with him on Gay Street, where he was taken to the ground by force.

Patrick Thomas was booked into the Metro Nashville Jail on August 20th, charged with public intoxication, resisting arrest, escaping custody, and evading arrest. He is free on an $8,600 bond.