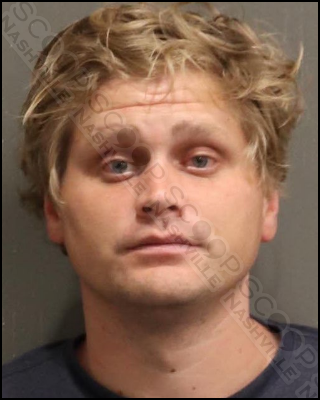 Metro Nashville Police responded to Rosebank & Porter Road in the early hours of Sunday morning at witnesses say they observed 32-year-old John Magnuson crash into a car and drive away from the initial impact area. Officers located Magnuson a short distance away behind the wheel of his 2019 Toyota Camry, which had heavy front-end damage. He stated he had not consumed any alcohol. Officers described him as very belligerent, and he refused to follow basic instructions. He reportedly reeked of alcohol and was unable to stand on his own. He attempted field sobriety tests, but they had to be stopped for his own safety due to his extreme level of intoxication.

John P. Magnuson, who lives in Nashville but listed an address of Babock Rd in San Antonio, TX, was booked into the Metro Nashville Jail on August 28th, charged with leaving the scene of an accident (LSA) $1,500 or less, driving under the influence (DUI), and implied consent. A judicial commissioner set his bond at $6,500, and the Davidson County Sheriff’s Office gave him pre-trial release from their facility.