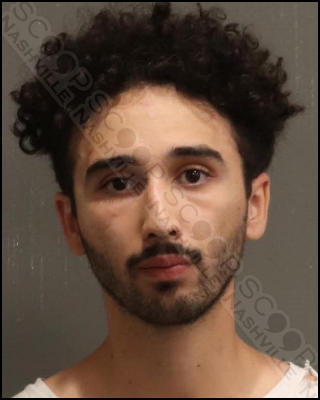 Metro Nashville Police and Fire responded to an incident at Kid Rock’s Bar late Friday night where they were assisting a patron turned patient. The patient’s friend, 23-year-old Alejandro Vasquez, began interfering with medics while also being extremely intoxicated from alcohol. After multiple requests for him to give them space and step away, he was eventually so combative that officers decided to detain him. As they attempted to place Vasquez in handcuffs, he tensed up and pulled away from the officers, and they eventually took him to the ground in order to gain compliance. He refused to be placed into a patrol car, and it took multiple officers multiple attempts to get him transported to booking, where he continued to be combative with officers.

Alejandro Vasquez of Kenowick Ct in Spring Hill, TN, was booked into the Metro Nashville Jail on August 26th, charged with public intoxication and resisting arrest. He is free on a $1,100 bond.