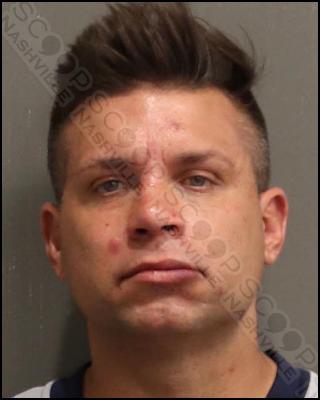 38-year-old Donald Chris Hudson was one of three men fighting with security and valet staff at the JW Marriott Hotel in downtown Nashville this weekend. Officers working the Entertainment District Initiative responded to the scene and viewed a video that showed the initial fight began with Hudson being approached by a person that was no longer present, and during the subsequent argument, Hudson quickly stood up and pushed the other man, causing a fight to break out. Due to this and his level of intoxication, Hudson was taken into custody and transported to booking.

Donald Chris Hudson of Johnson Ridge Rd in Antioch, TN, was booked into the Metro Nashville Jail on August 28th, charged with disorderly conduct and public intoxication. A judicial commissioner set his bond at $200, and the Davidson County Sheriff’s Office gave him pre-trial release from their facility.