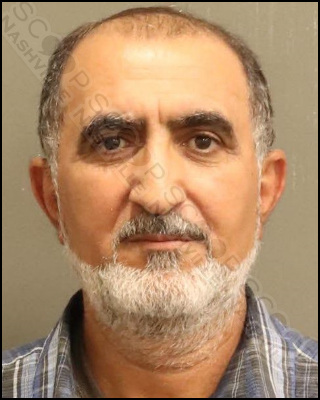 Police say 54-year-old Majid Hussain Alkanani is charged with the violent assault of his teenage daughter, which sent her to the hospital, and the assault of her boyfriend after approaching him in a parking lot and then sending death threats to the teen.

On August 25th, Majid Alkanai picked up his juvenile daughter from school and assaulted her by punching her with his fists and kicking her in the abdomen. On August 28th, he approached his daughter’s juvenile boyfriend in the parking lot of a Kroger grocery store and made threats to the child that something would “happen to him.” On August 31, Alkanani’s daughter went to her boyfriend’s family to seek help for the assault as she was still experiencing pain from her injuries and other medical issues.

When the father realized she was seeking help, he drove to the Midtown Hills Police Precinct in an attempt to report his daughter as a runaway child, but not before texting the boyfriend more threats on his life, including “faggot ass bitch” and “on fucking god I will kill you!” The messages were observed by the family of the boyfriend and caused them to fear for their safety, given Alkanani’s history of violence. The daughter was taken to Vanderbilt’s Children’s Hospital for treatment of her injuries, and they notified the police of the abuse and assault. As officers were taking this report at the hospital, they were notified that Alkanani was at the precinct, and he was taken into custody.

Majid Hussian Alkanani of Zermatt Ave in Nashville, TN, was booked into the Metro Nashville Jail on August 31st, charged with child abuse of a child 9-17, and assault. A judicial commissioner set his bond at $10,100.