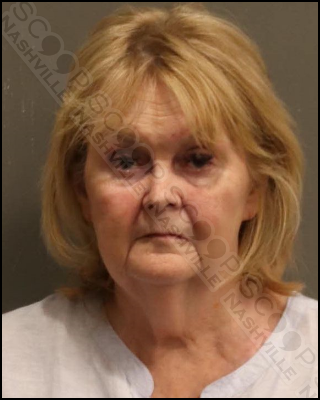 Vanderbilt University Police responded to a multi-car crash just after 2 p.m. Wednesday on 25th Ave S. near Garland, where a gray BMW struck a red Chevy pickup truck that was parked on the sidewalk as workers were performing maintenance. The driver of the BMW, 71-year-old Nancy Carr Kacena, stated she didn’t know what happened to cause the crash and was unable to locate the “park” button on her vehicle when asked to engage it. She stated she had not consumed any alcohol but did take other medication, including prescribed Hydrocodone. She was unable to stand on her own and performed poorly on field sobriety tests. Kacena was charged with DUI and transported to booking.

Nancy Carr Kacena of Hwy 49 in Charlotte, TN, was booked into the Metro Nashville Jail on August 31st, charged with driving under the influence (DUI). A judicial commissioner set her bond at $1,000, and the Davidson County Sheriff’s Office gave her pre-trial release from their facility.