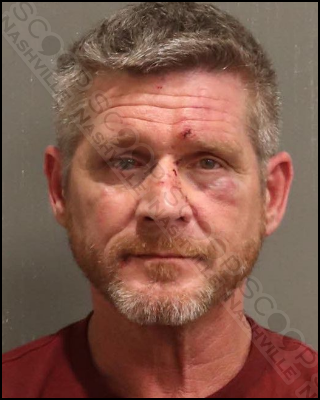 Allison Merriman says she was on a Tinder date late Monday night in downtown Nashville with 52-year-old George Stoddard, and it was their first time meeting in person since finding each other on the app. After a night of being at the bars on Broadway, they shared an Uber back to the Staybridge Suites hotel, where she and some friends were staying while in town this weekend, and where he had left his car parked. During the short ride 1.5 mile ride, she says Stoddard became agitated and jealous, believing she was flirting with the rideshare driver. Once they arrived at the hotel, Stoddard began to physically fight both her and the driver, punching her in the face, and dislocating her pinky finger. One of her friends, who was also staying at the hotel, came downstairs and attempted to break up the fight and kneed and punched Stoddard multiple times until he attempted to flee. As Stoddard got into his own car, he crashed into another vehicle in the parking lot during his attempt to flee the scene. He was charged with both assault and DUI.

George B. Stoddard of Camp Ground Rd in Grantville, AL, was booked into the Metro Nashville Jail on September 6th, charged with driving under the influence (DUI), assault, and implied consent violation. A judicial commissioner set his bond at $4,000, and the Davidson County Sheriff’s Office gave him pre-trial release from their facility.