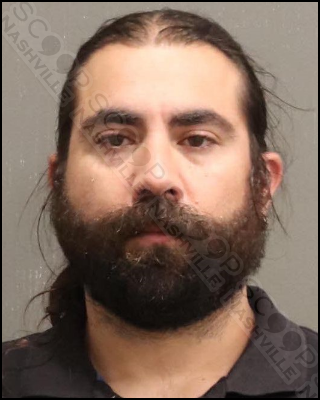 Sara Jarvis says she was making lunch for her nephew in the kitchen of the home she shares with other family members when her sister’s part-time boyfriend, 34-year-old Alex Zavolta, walked into the kitchen and grabbed her by the wrist, and spun her around before pushing her shoulders. She says that Zavolta, who also lives at the residence with the family, was acting very aggressively and growled at her during the assault. The victim had several finger-shaped bruises that appeared on the day after the incident.

Alex J. Zavolta was booked into the Metro Nashville Jail on September 6th, charged with domestic assault with offensive/provocative conduct and an order of protection violation. A judicial commissioner set his bond at $3,500.