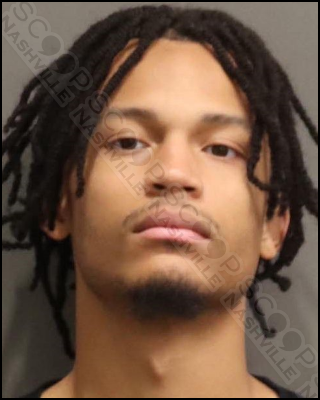 Just before 1 a.m. Tuesday, Metro Nashville Police responded to an AirBNB on Duke Street for a reported disorderly person. Officers made contact with several others nearby the AirBNB unit along with the subject of the call, 20-year-old Gabriel Gallien, who was extremely intoxicated and belligerent. While several people in the area stated Gallien had assaulted another person, no one would speak directly with police from the AirBNB unit, and all but one left the scene. Officers were content with leaving the area after the one remaining friend had mostly calmed him down, but as officers were preparing to clear the scene, Gallien pushed his way past the remaining friend and ran into the common area between the rental units. He then continued to yell, curse, and scream while waking up people in other units and causing a scene. As officers were placing him into custody for public intoxication and disorderly conduct, Gallien refused to comply and pulled away multiple times before being restrained.

Gabriel Gallien of Lance View Lane in Lawrenceville, GA, was booked into the Metro Nashville Jail on September 13th, charged with resisting arrest, public intoxication, and disorderly conduct. A judicial commissioner set his bond at $700.