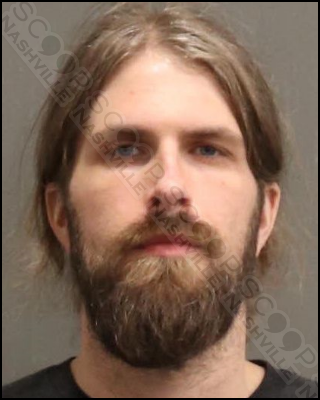 Artist Whitney Clanton was at East Side Bowl Sunday when she called to report her boyfriend, 33-year-old Michael Ford, had destroyed a piece of her artwork and returned a bag of clothing to her car, which had now been urinated on. She says she noticed him return to the venue just after 9 p.m. and destroy a piece of artwork, which had been in her car but was now broken across the parking lot. As she further looked into her car, she found a bag of her clothes which was at his house had been returned to her and urinated on. A warrant for Ford’s arrest was issued, and he was booked on the charge on Tuesday.

Michael B. Ford of Marswen Dr in Nashville, TN, was booked into the Metro Nashville Jail on September 20th, charged with vandalism of $1,000 or less. A judicial commissioner set his bond at $1,000.