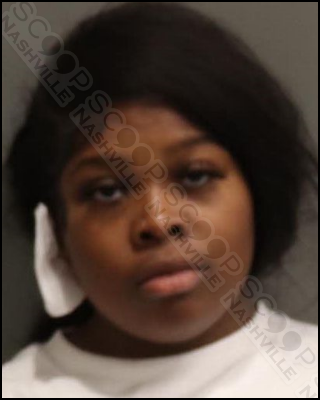 China Coleman says that Robbyn Black and a group of friends came into her workplace, Weiss Liquors, over the weekend and began to smash bottles of liquor on the ground. When she was asked to leave, Black threw a full bottle of liquor at Coleman’s head. As she attempted to flee, Black slipped and fell and dropped her phone inside the store. She came back inside, went behind the counter, took Coleman’s purse, and punched her in the face. Another employee grabbed a bat and struck Black in the head

Jayla reportedly came into the store, picked up a broomstick, and approached another woman while swinging it aggressively at her. Two bystanders intervened before she could strike the victim. She then threatened to assault the victim and retrieve a weapon from her car.

Robbyn Black of Tennessee Ave in Nashville, TN, was booked into the Metro Nashville Jail on October 28th, charged with assault, robbery, and vandalism. A judicial commissioner set her bond at $18,000.

Jayla Warner of Heron Pointe Dr in Nashville, TN, was booked into the Metro Nashville Jail on October 28th, charged with assault, disorderly conduct, and resisting arrest. A judicial commissioner set her bond at $8,000.