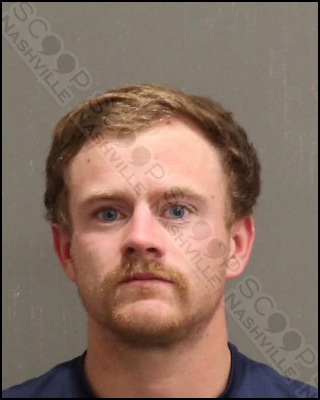 25-year-old Chase Jenkins crashed into another vehicle Friday night in North Nashville, then casually exited his vehicle and went to a nearby convenience store for “water and gum” while the woman in the impacted vehicle remained in her driver’s seat. Officers located him standing near the doors of the gas station and say he reeked of alcohol. As he was walked back to the scene of the accident, he reportedly told officers he had drank three beers in the three hours prior to driving. He attempted field sobriety tests, but they had to be terminated for his own safety due to his level of intoxication.

Chase Alexander Jenkins of Jim Read Rd in Chapmansboro, TN, was booked into the Metro Nashville Jail on November 4th, charged with driving under the influence. A judicial commissioner set his bond at $2,500, and the Davidson Couty Sheriff’s Office gave him pre-trial release from their facility.