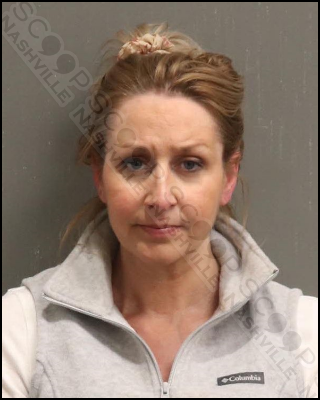 43-year-old Whitney Ann Busse is charged with the domestic assault of her boyfriend, Ryan Langwald, during their trip to Nashville this week. Metro Nashville Police responded to the Drury Inn in downtown Nashville to find Ryan injured, and he explained the couple was in a verbal argument which escalated when he attempted to leave the location to de-escalate the situation. He says as he attempted to leave, Whitney blocked the door and pushed him into the deadbolt, causing a cut on his arm when he attempted to reach around her to open the door. Whitney says he was just trying to leave to go party, and she didn’t want him to miss his work meeting the next morning.

Whitney Ann Busse of Stoneybrook Ct in Greenwood, IN, was booked into the Metro Nashville Jail on November 8th, charged with domestic assault with bodily injury. A judicial commissioner set her bond at $1,000.