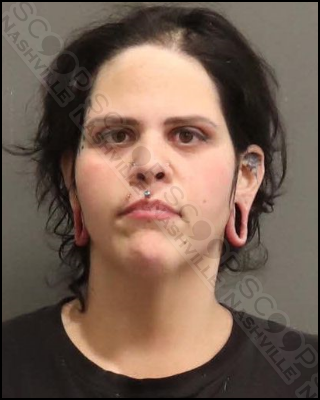 Richard Keymon says he returned to their apartment late Tuesday to find his 34-year-old girlfriend, Nicole Presta, in a closet with a gun to her head. After disarming her and giving the firearm to her roommates, Amanda Isenhaur and Zachary Dubois, he says she then armed herself with a butcher knife from the kitchen and threatened to stab Keymon, stating, “I’m gonna stab you, I’m gonna stab me.” She was also disarmed of the butcher knife. The gun and knife were collected as evidence, and Presta was charged with aggravated assault with a deadly weapon.

Nicole K. Presta was booked into the Metro Nashville Jail on November 16th, charged with aggravated assault with a deadly weapon. A judicial commissioner set her bond at $5,000.