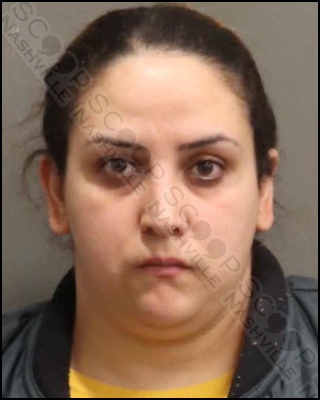 31-year-old Marcel Labib is accused of putting her husband, Youssef Shawk, in a rear choke hold until he was unable to breathe and scratching at his face when he refused to come to her aid with a flat tire. When she called him to help her, as she was stranded, he reminded her of his “hand injury” and advised her to call a tow truck instead. After the tire was fixed and she returned home, Marcel reminded Youssef that she cooks, cleans, and takes care of the home and that he could at least attempt to help her. He says she was irate and came at him, scratching at his face. As he attempted to shield his face, he says she put him in a rear choke hold, preventing him from breathing. The assault occurred in front of their two minor children, who attempted to separate their parents. Marcel is charged with domestic assault with bodily injury.

Marcel Labib of Dabbs Ave in Nashville, TN, was booked into the Metro Nashville Jail on November 17th, charged with domestic assault with bodily injury. A judicial commissioner set her bond at $1,500.