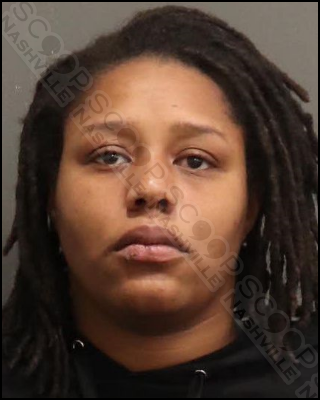 Police responded to the O’Charley’s on Rivergate Parkway and met with 27-year-old Shardae Bell, who advised she had been assaulted by her ex-boyfriend during a child-custody exchange at the location. She says Terrance Jones was removing the child’s shoes and new clothing and dressing her in another set of clothing, as Shardae reportedly didn’t return the new clothes with the child on a prior exchange. She claimed she reached in to grab the child, and Terrance hit her in the face and pulled a gun on her before fleeing the scene.

Terrance returned to the location to also speak with officers, and they immediately noticed he was holding a large piece of his hair that appeared to have been ripped from the scalp, with a visible injury. He explained that as he was changing the child’s clothing, she attacked him and ripped out his hair. Witnesses confirmed that Shardae was the primary aggressor, and her version of events was untrue. After she was in custody, her child randomly spoke and said that her dad was hurt and her mother ripped his hair, without any prompting.

Shardae L. Bell of 19th Ave W. in Springfield, TN, was booked into the Metro Nashville Jail on November 20th, charged with domestic assault with bodily injury. A judicial commissioner set her bond at $1,500.