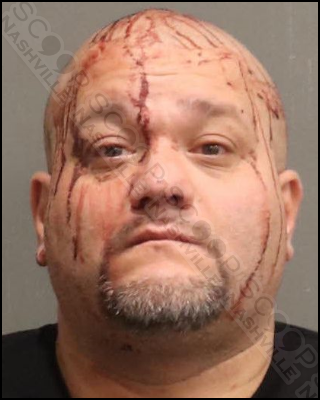 Metro Nashville Police say 39-year-old Wisconsin tourist Anthony ‘Tony’ Mayen was observed by multiple witnesses dragging his wife, Adrianna Mayen, down the sidewalk on 2nd Ave in downtown Nashville by her hair. Witnesses Rebecca and Megan Mogetz say the victim appeared helpless, and they yelled at Tony to stop. When he noticed police were approaching, he stopped assaulting his wife and walked toward Broadway. The victim stated she was afraid of further assault if they arrested him. As Tony was taken into custody, he yelled obscenities at the officers. Another officer confirmed that had taken a report involving Tony and another patron fighting at Miranda Lambert’s bar shortly before the assault on his wife.

Anthony Marco Mayen of N Brookfield Rd in North Brookfield, WI, was booked into the Metro Nashville Jail on November 26th, charged with domestic assault with bodily injury. A judicial commissioner set his bond at $2,000.