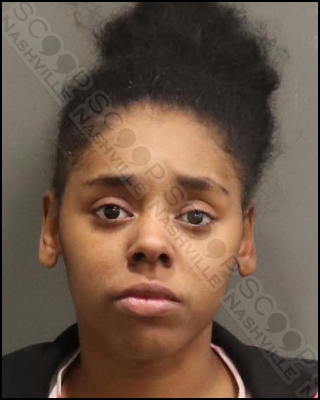 Demartin Robinson shares a child with 26-year-old Tyshecka Carter, and the two are no longer in a relationship. He says she showed up at his apartment with the child unannounced for an unplanned visit on November 25th. He was unprepared for a visit and had his current girlfriend at his home. Tyshecka reportedly was upset he had his new girlfriend at his home and became angry and aggressive at the door. Not wanting to cause a scene his neighbors might see, he let her enter the house, at which time she sat the child down and immediately attached Robinson, tearing his shirt and leaving scratches on his body. She swung at him with a ceramic lamp, causing a laceration on his hand. She also destroyed his television and strangled him. She then drove away, but not before striking his car with her own. She was pulled over by a responding officer for a traffic stop immediately after the assault.

Tyshecka L. Carter was booked into the Metro Nashville Jail on November 25th, charged with aggravated assault with a deadly weapon and vandalism. A judicial commissioner set her bond at $11,000.