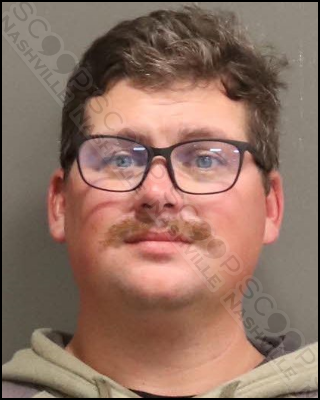 36-year-old Joseph Tabor Riser is charged with driving under the influence after driving his vehicle into an unoccupied vehicle at Music City Center in downtown Nashville. Riser was taken to St. Thomas Midtown Hospital after he told paramedics he was having a medical emergency. Officers met with Mr. Riser at the hospital, where he told police he had been drinking but only had “two bourbons.” He also informed police he was charged with a DUI in South Carolina 5 years ago, but a conviction wasn’t located during a search. He performed poorly on field sobriety tests and was charged with DUI.

Joseph Tabor Riser of N Shem Dr in Mt Pleasant, SC, was booked into the Metro Nashville Jail on December 11th, charged with implied consent violation and driving under the influence. A judicial commissioner set his bond at $1,000.