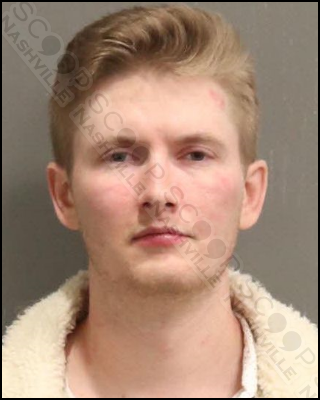 25-year-old Adam Michael Lowe was detained by Jobie Alexander and other citizens in downtown Nashville after he was observed grabbing his girlfriend by the hair. The couple was near 4th & Broadway amid an argument when downtown security officers asked them to move along. Lowe was being belligerent and refusing to go with his girlfriend and others, and that’s when he grabbed her by the hair. He was detained until police arrived, at which point he was taken into custody for domestic assault.

Adam Michael Lowe of Portsmouth Dr in Reynoldsburgh, OH, was booked int the Metro Nashville Jail on December 17th, charged with domestic assault with offensive/provocative conduct. A judicial commissioner set his bond at $1,000.