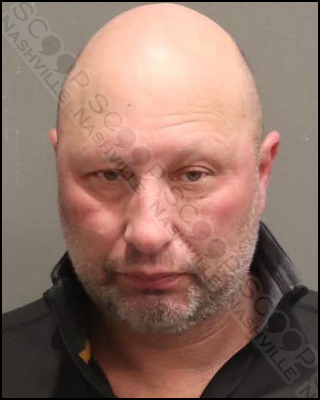 48-year-old Jeremy Bryan McQuillen was observed doing “donuts” in the parking lot of a church parking lot on Old Hickory Blvd Friday night. The pastor of the church asked him to leave and noticed that he appeared to be intoxicated and called 911. As officers arrived, McQuillen attempted to leave the frozen area of the parking lot and, upon contact, was acting erratically and had multiple signs of intoxication. McQuillen admitted to drinking alcohol, and several open alcohol containers were located inside the vehicle.

Jeremy Bryan McQuillen of Cato Rd in Gainesville, GA, was booked into the Metro Nashville Jail on December 23rd, charged with driving under the influence. A judicial commissioner set his bond at $2,000.