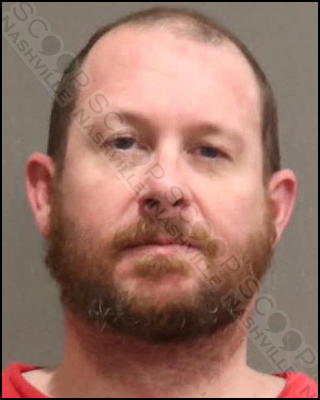 Airport Police responded to a disturbance at Gate C10 Thursday, where an American Airlines Pilot simply pointed at 44-year-old John Alexander Enloe, who he described as “the man in the red shirt.” Enloe, who was visibly intoxicated, told police he was actually the victim of an assault. He explained that another passenger continued to place their bags in what he considered to be a public walkway, and he continued to move them out of the walkway. The other passenger made contact with Enloe’s hand as it was on their suitcase, and Enloe claimed an assault. Officers advised Enloe he could go to the magistrate’s office and swear out a warrant if he wished to prosecute for the perceived assault. Unhappy the police were not arresting his alleged assailant, Enloe began screaming and dramatically replaying the events leading up to the officers’ arrival. He was screaming at uninvolved flight crews and cursing with children present in the area. After he refused to calm down, Enloe was taken into custody and charged with public intoxication and disorderly conduct.

John Alexander Enloe of Executive Drive in Alpharetta, GA, was booked into the Metro Nashville Jail on December 22nd, charged with public intoxication and disorderly conduct. A judicial commissioner set his bond at $200, and the Davidson County Sheriff’s Office gave him pre-trial release from their facility.