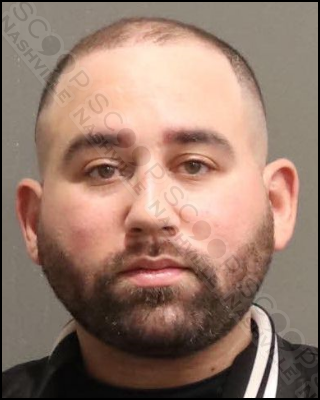 31-year-old Sony Music recording artist Ashton Latadre Parson was charged with a DUI in January after crashing into a dumpster behind Checkers in East Nashville. A month later, his attorney, Nick McGregor, got his charges reduced to reckless endangerment, and Parson, who goes by the stage name of ‘Parson James’, received a suspended and probated sentence of 11 months and 29 days. Overnight, Parson was arrested for yet another DUI after he crashed at 17th & Edgehill. He admitted to consuming two glasses of wine and refused a blood test because of taking “medicinal things,” which he later clarified was marijuana. A warrant was obtained for his blood, and a draw was completed before he was transported to booking.

Ashton Latadre Parson of Shelton Ave in Nashville, TN, was booked into the Metro Nashville Jail on December 30th, charged with implied consent violation and driving under the influence. A judicial commissioner set his bond at $1,500.